Welcome, all content is the copyright of the author © Geoff Gradwell
Please do not reproduce without asking. Thanks.
New at this and finding my way around. Any help appreciated!
Monster, Orloton Bunting May 2009

hey hum... another wet and grey day, so some bits and pieces while I have nothing better to do.

The Blue Tit box is just above the window I gaze out upon the world from and I can watch the Blue Tits come and go. Last year, I thought there was a sudden disappearance and when I checked the box several weeks later there were 13 dead young. I guess the adults succumb to some predator or other, and the main predator around here are the numerous 'domestic' cats. And yesterday while dressing the front lawn there was four fresh cat crap piles for my enjoyment, that I nearly stood in... if it had been dog crap...

The bullfinch are still around but not as regular, mind you the grey squirrels, magpies, wood pigeon, collared doves and feral pigeons are decimating the food before they can get to it, and they wont come when those piggies are gorging themselves. I've noticed tidying up can be counter-productive as the bullfinch will feed on spilt seed on the ground.

I lost all my fish years ago and gave up restocking the pond. Gazing out of the window (you should do so regularly to avoid eye strain while spending hours in front of a computer) ... I could see something high on the ridge line of the house at the back. Sure enough a Grey Heron slowly walked down the roof to the eaves and guttering whereupon it flopped down on to the back garden fence – which has a hedge and trees grown in front of it (a safe haven for the birds), a natural obstacle, or so I thought. The Grey Heron then with a single flap of its wings hopped onto the top of the dividing fence-line... which also has a hedge in front of it and then down onto the flagged patio area! I just watched in amazement. Grabbed the camera and took a couple of shots in the rain. I wasn't about to allow the Grey Heron to clear out the pond of my amphibians and a sudden movement from me and it was off. There is now netting over the pond. I wouldn't mind if I lived in acres of landscaping but the garden is so small, 'pocket handerkerchief',  you can't swing a cat – I've tried!*

Down at Newton Marsh, one of those mixed days where the skies were grey, leaden and threatening while the sun broke out through a gap in the clouds and I managed a shot of Shoveler in flight. A male came close enough not to be ignored. I've always liked Shoveler but can't help but think how odd they look. I think physchologically I have a soft spot for them because they look so odd – a Friday afternoon job, where while creating the Shoveler, somebody grabbed a beak at the last minute, without looking and threw it on before rushing off to the pub. I always expect to see them on Saturday morning when somebody has corrected the error and put a 'proper' beak on them – but it never happens. So they are left with that daft look for eternity. Of course we all know this is natural selection at work and their bills are a great device for their filter feeding. I still have empathy for them.

A Common Sandpiper or two have been around. The water levels have dropped considerably and this has improved conditions for the waders, especially the Black-tailed Godwits but not of course for the ducks.

Down at Preston Docks for a check on the Common Terns, and a number of hirundines were near the lock gates in a very strong wind, which seizing the opportunity allowed me to take a couple of images of Swallows and a lone Sand Martin. Martin Jump found a Gannet in the dock and we were there to grab a couple of images. Unfortunately it expired that evening. I wasn't going to post the photos of the bird but in retrospect, there is no sympathy in nature only a human projection, and such a magnificent bird it should be appreciated not mourned. 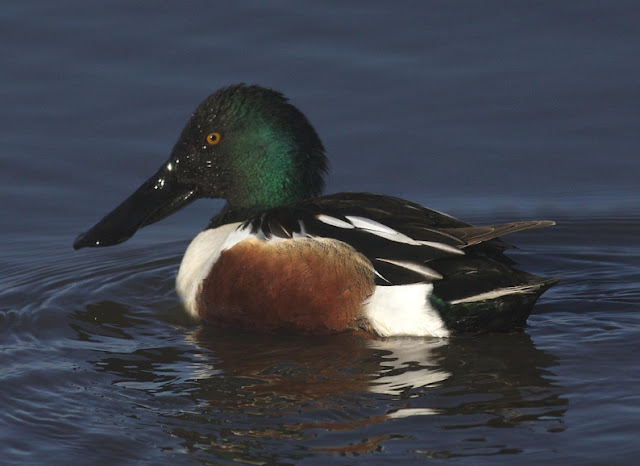 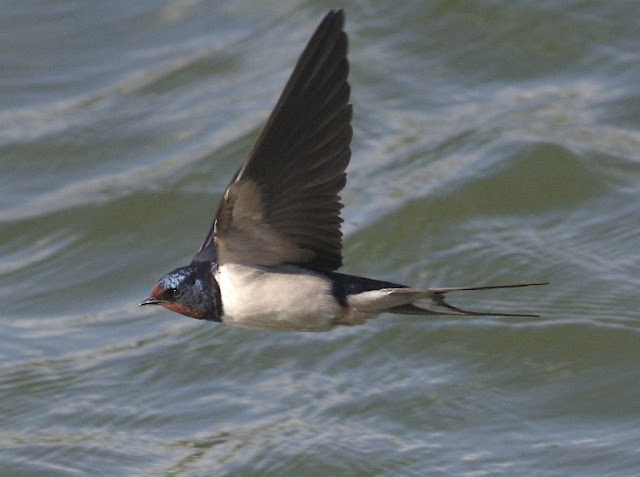 Geoff - nice to bump into you today, I enjoyed our chat. Shame about the gloomy conditions, typically the sun was shining by the time I got to Lytham - gives me a good excuse to make a return visit though.

As mentioned you're getting some excellent photos Geoff. The squabbling Godwits in your previous post are superb, & the Swallow with wings spread wide open is another beauty, the Sand Martin's not too shoddy either.

Geoff. Some super shots here..The swallows are great,I have yet to capture swallows in flight,difficult!! Love Hilda Ogden's shovelers. No doubt meet up at the terns sometime.